Introduction to Docker, and a Practical Example


What is Docker and what you can do with it?

Docker is a tool that allows us to prepare packaged applications. Those packages are called containers.


One of the main advantages of using Docker is that you would need to set up the application you want to use, only once.

To the contrary, if you were to set up the application in the usual way, you may need to repeat the set up process when, for instance, you had to install it on another machine.


Let me clarify this with an example. Let's say that the application we are talking about is a web server ... like Apache Web Server.


In the usual way, to install a web server, the first steps would be to download, install, and configure it.
Then, you may need to install additional extensions or add ons. In some cases, you would also have to compile from source code programs.


So...what would happen if you need to set up the same web server on another machine?...Well, you would need to repeat all those steps again.


With Docker you would have defined all those steps on a text file--called Dockerfile--and then run it with the Docker command.


Docker automates the set-up process, so that when you require to repeat the process, you only have to copy the Dockerfile and run it. This is good when you need to install the application on another machine, and also if you want your friends, or coworkers to have the same set-up as yours.

Let's try Docker with an actual example.
We are going to create a container of an Apache Web Server running on Centos 7.


We start by creating a text file named "Dockerfile" and adding the following content on it:

• The first line of our Dockerfile defines that we will be using Centos 7 as the basis of our container.
• Then we indicated that we are going to install the "httpd" and "httpd-tools" packages. (The Apache Web Server)
• And lastly we indicate to start the web server by running the httpd command.


Now we are ready to run our first Docker command.

On a terminal window, and on the same folder that we have our Dockerfile, type the following command, to create a Docker Image:


• The parameter after the "-t" flag, is the name of the image--which, in this example, we are naming "image_apache"
• You can use any name you want.


The output of the command will show all the required software being downloaded, installed and configured automatically. 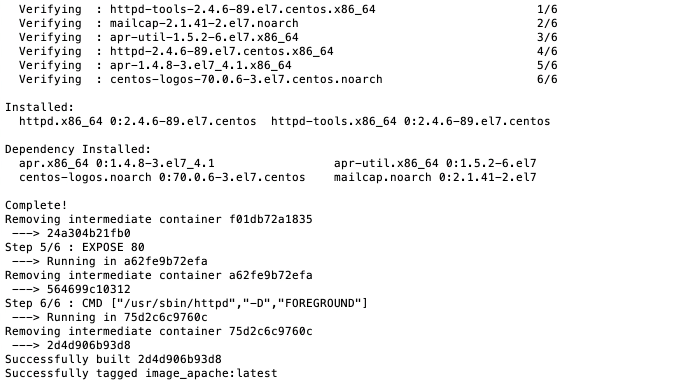 Once that the above installation process has finished, we can list the images installed on our system, and confirm that the one we just created is there.


The docker images command will show the images:

Now, we are ready to create our first container.

Enter the following command in your terminal window.

Then we can list the existing containers, to see the one we just created.


On the list of containers, you will notice that the status of the containers is UP.

To test our container, open your favorite browser and go to the following url, http://localhost:4000

You should see the following screen, which is the default page of the Apache Web Server on Centos 7. 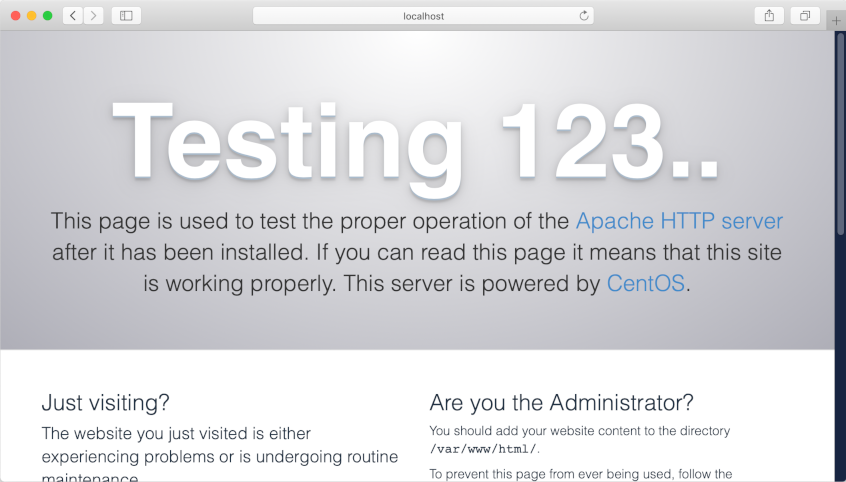 Attach a Local Folder to the Docker Container

Now that we have a web server running, you may be wondering how to a put my website in there.
Because if you are going to have a web server, it is because you want to run a website locally.

Well, what we have to do is to attach a local folder, containing our website files, to the container.

Let's say that we have a local folder with the following file:


And with the following content on the index.html files:


We want now to use our local folder as the root folder our web server on the Docker container.


First, we would need to stop and delete the container that we have just created above.

If you didn't create the container, just skip this step.

Now we create the Docker container with the following command.

If you open the browser at the url http://localhost:4000, you will see your website's index page.

There are some additional Docker Commands that may be very useful.


The following command will allow you to open a terminal window into the Docker Container.


To view the logs.


To start a container.


To stop a container.

Laravel CRUD with a Resource Controller

How to install Docker on Mac OS X